Story Behind The Blog

There is an old Scandinavian saying that was taught to me by my father, an old Scandinavian. He told me, “You cannot defeat a man who will not be defeated. You can kill him, cook him, and eat him, but you can’t defeat him unless he’s willing to be defeated.” Later I found that Hebrews chapter eleven confirmed what he taught me; many there were martyred but they were not defeated. They died with their trust in God intact; their belief in His ultimate rescue still blazing.

In Luke chapter 15, Jesus told a story of the return of a prodigal son. I had a prodigal son. While he did not run off to a far country, he was lost to us for a while to addiction and bad choices. During those days I was constantly reminding him of what my father taught me, that though these things had a hold on him they could only overcome him if he allowed them to.

By God’s good grace, he eventually turned back to us, overcame his addiction, and was given a new start; another chance to live in victory.

In the parable Jesus told, when the father saw his son was home he told his servants, “… ‘Quick! Bring the best robe and put it on him. Put a ring on his finger and sandals on his feet. Bring the fattened calf and kill it. Let’s have a feast and celebrate. For this son of mine was dead and is alive again; he was lost and is found.’ So they began to celebrate.’”

Some months after my son returned to us as we were preparing for his wedding, Jesus’ story was heavy on my mind. I wanted our family to celebrate the same way. I thought, I’ll buy him a jacket and a ring and at his wedding reception we’ll welcome him home just like the gracious father of the parable. Then I remembered that in the parable the young man’s older brother was upset that the kid got a party but there was no such celebration for him. So, I thought, I’ll make sure that my prodigal’s siblings will be included in the festivities. I ordered jackets and rings for them all. But I wanted the ceremony to be remembered for generations. I decided to have something put on the back of the jackets that would be special and would commemorate the occasion and our clan’s bond. 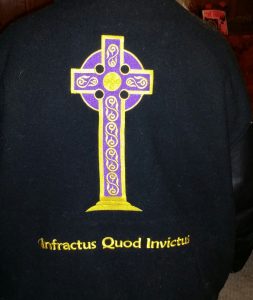 Ah, ha, says I to myself, I’ll put my father’s words on the back of the jackets. After days of trying I decided that “you cannot defeat a man who will not be defeated,” could not be inscribed on a jacket in letters large enough to read. Not to be put-off, I spent days attempting to rephrase my father’s words. Finally I came up with the phrase, “broken, but undefeated.” I liked the words; they expressed what I felt but still needed something more.

Latin, I said to myself, it needs to be in Latin. Latin is cool, and classy. So I went to my Latin lexicons and set out to find the right words. Since I was not proficient in Latin, having spent my seminary time in Greek, it was a laborious task. And, since this was to be a surprise, I couldn’t ask my oldest son, who is good as such things, for help. For days I labored. Then, with God’s help I’m sure, I got it.

Infractus Quod Invictus is what developed…

Latin for broken but undefeated.

So that has become our family’s motto, and the statement of purpose for me. The New Testament says that as believers in Christ we are more than conquers, we are victorious, because Jesus was victorious.

He was abused, tortured, and killed; He was not defeated. I want to be like Him.

Scripture says that now by grace through faith I have His Spirit and that I have been predestined to be conformed to His image. Praise be to God, I, because of Adam’s sin and my own, am broken; but because of Jesus’ victory, I am undefeated.

14 thoughts on “Story Behind The Blog”

My heart is full of gratitude to you for sharing this. Thank you.

Hi Judy… Thanks for your encouraging words. I am sorry for being tardy in my response to you. As I said, I’m new to all this. God’s blessings to you and Merry Christmas!

For much of my life one of my goals has been to still be standing when He returns.

Hey Cliff, thanks for reading my blog. I am blessed. Finishing strong should be the goal for all Jesus Followers. I think it probably is, but it is, as Rich Mullins wrote, hard to be like Jesus. God’s Blessings.

Thanks Fred. I pray all is well for you in your new chapter of life.

What an awesome read!

Thank you, that spoke volumes to me and I would like to adopt that moto also, it speaks volumes to me. Of the last ten years of my life, my journey with chemo and radiation treatments, the surgeries and a unwanted divorce after 29 years.

But out of all that, what the Father has me doing now, was birthed out of that journey! The writing, the coffee cup ministry, a ministry of hanging out was birthed!

Thanks Paul. Wow, you’ve had a decade most of us hope never to have. It’s good to hear that God is doing special things through you as you come out of such circumstances. God’s blessings brother!

This is so very special.. Thank you so much for sharing something so personal with us. It helps us all to see that we are all a bit broken but undefeated by gods grace.

Hi Melissa. I’m honored you read my piece. Thanks for your kind words, they’re very encouraging.

May your sons rise up as Godly men and may many more follow!

Thank you Sue! Each of my sons, and my daughter, are on journeys of their own. Like you, I pray their journey is with Jesus and leads to righteousness. But, like each of us, their paths have trials and tribulations. Thanks for the words of blessing.

Thanks Ross. Powerful words, challenging godly wisdom and just what I needed to be reminded about.

Hey Dan, thanks for reading my piece and for your encouraging words.